Are you concerned that you or a loved one may be struggling with alcohol use disorder (AUD)? This indiscriminant, chronic, relapsing brain disease is extremely dangerous and can impact anyone, regardless of age, gender, ethnicity, body type, and personal beliefs. While alcohol consumed in moderation is rarely a cause for alarm, those suffering with AUD often compulsively crave and consume alcohol well beyond the acceptable daily ranges. In these cases, drinking leads to an inability to control intake and is accompanied by both emotional and physical dependencies. AUD can also cause higher susceptibility to certain cancers, heart disease, high blood pressure, stroke, digestive problems, and memory loss, as well as increase the likelihood that an individual will partake in unsafe activities.

AUD may not be the only diagnosable disorder negatively impacting your life or the life of the person you care about, however. It’s possible that you or your loved one is also struggling with Attention-Deficit / Hyperactivity Disorder (ADHD). In fact, approximately 25% of AUD patients are diagnosed with ADHD. Additionally, studies have indicated that children with ADHD are more likely to abuse alcohol as adolescents.

When paired, AUD and ADHD are particularly dangerous and often require specialized treatment.

What is Dual Diagnosis?

Dual diagnosis, also referred to as co-occurring disorders, occurs when an individual has both a mental and a substance abuse problem. While any pairing is possible, the most common mental disorders associated with AUD are:

Dual diagnosis is far more common than you may think. According to the 2014 National Survey on Drug Use and Health conducted by the Substance Abuse and Mental Health Services Administration, over 18% of Americans over the age of 18 years old (approximately 43.6 million people) had some form of mental illness. Additionally, about 8.4% of American adults (roughly 20.2 million people) had a substance abuse disorder. With such staggering numbers, it’s no surprise that approximately 7.9 million adults had a dual diagnosis in the United States alone.

There is no set order in which the conditions must develop. For some people, it’s the mental disorder that occurs first and then later leads to the use of alcohol as an attempt to temporarily escape or feel better. Others, on the other hand, abuse alcohol first and develop an emotional or mental disorder over time.

Unfortunately, dual diagnosis is often difficult to identify and, as a result, patients may only receive treatment for one disorder or the other. There are several reasons that this oversight may occur, including:

Regardless of the cause, there can be severe consequences when those suffering from multiple disorders are undiagnosed and do not receive the appropriate treatment. While every situation is different, letting both disorders persist increases the likelihood of homelessness, incarceration, medical illness, suicide, and/or early death.

ADHD is a very common neurodevelopmental disorder that’s usually diagnosed in children. The condition does, however, last into adulthood and present clinically significant symptoms for up to 60% of patients. It’s frequently identifiable by impulsiveness, lack of attention, and over-activeness. It’s important to realize that ADHD symptoms vary, but some of the most common include:

While these traits aren’t completely out of the ordinary for children at varying ages, they are often more severe, occur more often, and interfere with various aspects of life in those with ADHD. Additionally, children will not simply “grow out” of these behaviors over time. They will remain consistently present and can cause significant problems in social situations, at home, and at school.

The two most common elements of ADHD are inattention and hyperactivity/impulsivity, which is why the condition is divided into three separate types:

The causes and risk factors of ADHD are mostly unknown. Like with AUD, however, research indicates that genetics play an important role. Other commonly associated risk factors include:

Research does not, however, support the misnomer that ADHD is caused by consuming large amounts of sugar, watching television, poor parenting, or poverty. It’s always possible, though, that outside factors such as these can make symptoms worse in certain individuals.

While the specific cause of ADHD is unknown, studies have shown that males are more susceptible to the disorder than females. Additionally, females with ADHD are most frequently diagnosed with Predominantly Inattentive Presentation.

Patients don’t always exhibit both inattention and hyperactivity/impulsivity; in some cases, it’s simply one or the other. In either case, an ADHD diagnosis must be provided by a licensed pediatrician, psychologist, or psychiatrist with ADHD expertise after a comprehensive evaluation. This occurs most often during childhood. Adolescents and adults diagnosed with ADHD must have shown symptoms before turning 12 years old. In all cases, the symptoms must:

It’s also important to note that ADHD symptoms can change as a person ages. While hyperactivity/impulsivity may be predominant in childhood, it’s possible for inattention to become more prevalent over time. The traits that persist most into adulthood are inattention, restlessness, and impulsivity. 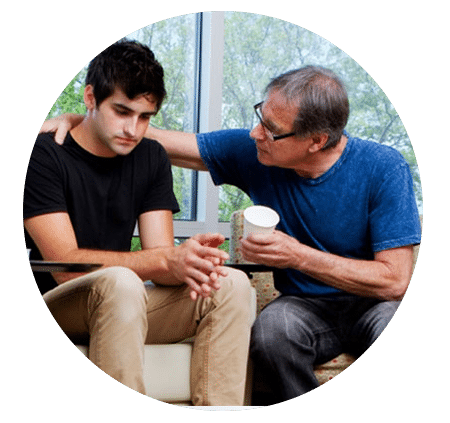 In general, those who are diagnosed with ADHD are more likely to abuse substances like alcohol, tobacco, and various illicit drugs. In fact, a 2011 study that examined the association of ADHD with substance use found that those with the condition are nearly two times more likely to experience alcohol abuse and/or addiction. Additionally, the National Comorbidity Survey Replication found that approximately 15% of people who are diagnosed with ADHD meet the criteria for a substance abuse disorder.

There are a number of reasons someone with ADHD may begin abusing alcohol. It’s possible they:

It’s important to remember that alcohol is a depressant. While those struggling with ADHD may expect it to help them relax and tone down their hyperactivity, it often has the opposite effect. Additionally, drinking may actually enhance ADHD symptoms. For example, patients who already possess impulsive tendencies may be even more inclined to participate in questionable activities, such as drinking and driving. For those diagnosed with ADHD, the consumption of alcohol may also make it exponentially more difficult to focus or process thoughts. This can be particularly detrimental in cases of binge drinking.

Not everyone who drinks alcohol has a substance abuse disorder, with or without an ADHD diagnosis. Women can safely consume one drink a day and up to seven drinks a week. Men, on the other hand, can safely consume two drinks a day and up to 14 drinks a week. Drinking in excess of these numbers, however, is when problems begin to develop. Binge drinking is characterized by the consumption of four to five alcoholic beverages within a two hour period. Those with ADHD may be more susceptible to this kind of drinking, as the impulse to keep going coupled with the increased difficulty avoiding temptation can make stopping exceptionally challenging.

While ADHD and AUD are commonly believed to have genetic roots, the causes of both conditions are still mostly unknown. It’s possible that AUD and many other substance abuse disorders are more likely to develop as a product of ADHD symptoms, like impulsivity and behavioral difficulties, and their corresponding consequences, like poor academic performance and trouble with social situations.

Not everyone who is diagnosed with ADHD will develop an alcohol use disorder. Those who do, however, will be faced with a number of unique issues. Each condition is accompanied by its own set of elements that can negatively impact daily life. While the specific issues will vary depending on the individual, some of the most common challenges dual diagnosis ADHD and AUD patients face are:

The first step to recovery usually entails discontinuing the use of alcohol, but the two conditions must be treated simultaneously. Attempting to treat just one of the conditions at a time will not work. In most cases, leaving ADHD untreated will make relapse and substance abuse more likely. Similarly, leaving AUD untreated will make ADHD symptoms worsen. Integrated treatment plans, on the other hand, work across the disciplines to address both ADHD and AUD simultaneously.

Integrated treatment plans that seek to address mental health and substance abuse simultaneously have proven to be very successful in treating patients with dual diagnosis. Not only is this approach often less expensive, it also frequently results in a reduction of substance abuse, improved psychiatric functioning, decreased hospitalization, increased stability, fewer arrests, and a better quality life.

Overcoming AUD is difficult, but not impossible. Research shows that AUD patients who receive treatment are significantly more likely to recover, regardless of the severity of the condition and its duration. While there is no cure for ADHD, consistent treatment can help to reduce symptoms and improve the overall quality of life.

Luckily, neither of these conditions require particularly unusual treatments. Many treatment plans consist of the following to varying degrees: therapy, medicine, exercise and diet, and support groups.

Therapy can be especially beneficial for ADHD patients, as substance abuse often stems from issues that are predominantly social, such as a lack of confidence or difficulty making friends. Therapists can also help to identify relapse triggers and create strategies to better avoid them.

Medicine has been successfully utilized to treat both ADHD and AUD. Approximately 80% of ADHD patients notice a decrease in symptoms when taking prescriptions like Ritalin and Adderall. Some AUD patients also respond well to medicines like disulfiram, naltrexone, and acamprosate, which help to reduce the desire to drink or cause a negative physical reaction to drinking. In some cases, antidepressants may also be prescribed.

ADHD can be significantly impacted by dietary choices and activity levels. Eating healthier and exercising regularly can help stabilize mood and maintain focus.

Participation in support groups is also frequently recommended, as these provide a level of treatment aftercare that tends to keep patients on the right track. In addition to the support received from peers, the added structure of the meetings can be extremely beneficial.

It’s important to realize that no two treatment plans will ever be completely identical, as the process is most successful when it’s tailored specifically to the patient. Treatments should always address individual patient goals and utilize strategies that he or she is comfortable with.

Do you think you or a loved one has a dual diagnosis of AUD and ADHD? Don’t waste more time speculating; seek a professional opinion from a licensed pediatrician, psychologist, or psychiatrist with ADHD expertise right away. A primary healthcare specialist will be able to perform a comprehensive evaluation and design an individualized treatment plan. The earlier you seek help for yourself or a loved one, the sooner treatment can begin.

Living with ADHD and AUD isn’t easy, but help is available to those who seek it. If you believe you or a loved one is struggling with one or both of these conditions, reach out to a healthcare professional and treatment specialist today. Addiction helplines are also available.