Alcohol has been enjoyed and abused for centuries but only in recent history have we begun to fully understand the effects it has on our bodies. Sure, drinking can make you feel happier and more relaxed, but over-indulgence and excessive drinking can have adverse consequences to your health.

According to the National Institutes on Health (NIH) the effects of alcohol can vary greatly from person to person due to a wide range of factors. Your age, gender, and health all play a role as does how much you drink and how often. You family history also plays a part on how you may be affected by alcohol.

While most people know a drink or two will generally make you more relaxed in a social setting it's important to understand how excessive drinking can damage your health. The Centers for Disease Control (CDC) states excessive alcohol consumption caused 88,000 deaths last year alone: one in 10 deaths of working-age adults between the ages of 20 and 64. Here's a look at the effects and health risks associated with drinking too much or too often.

Understanding Effects on the Body

Short-term health problems are most often associated with binge drinking or drinking an excessive amount of alcohol in a short period of time. Here are the main risks:

Long-term health effects are usually associated with excessive alcohol use over a long period of time, which can lead to many chronic diseases and problems such as: 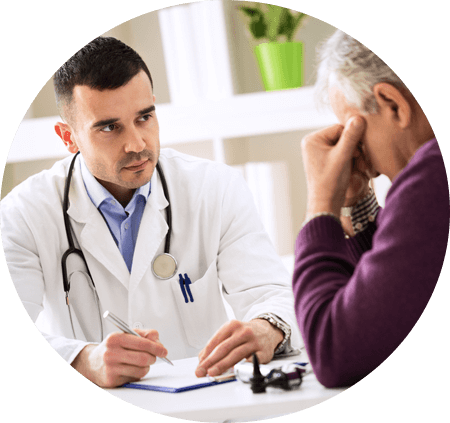 Your nervous system is made up of your central nervous system (CNS) which is the brain and spinal cord and your peripheral nervous system (PNS) which is basically the network of nerves that expands from your CNS. Alcohol acts as a depressant to the nervous system, meaning it slows down the neurotransmitters that allow your brain to communicate with the rest of the nerves in your body. In the short-term this can impair your vision, judgment, and alertness while slowing down your reaction time and coordination. That's why you slur your speech a bit and might stumble when you've had too much to drink. These effects are temporary and don't usually cause permanent damage.

Side Effects of Alcohol Abuse

Alcohol abuse can have simple side effects such as a hangover or weight gain but for the most part long-term side effects are much more lethal.

Short Term Effects: Light alcohol consumption won't usually cause any damage; in fact many doctors believe one or two light drinks per day will reduce cardiovascular disease and lower the odds of dementia. One or two light drinks is equal to 12 ounces of beer, four ounces of wine, or an ounce and a half of liquor. This may cause the following symptoms:

Excessive alcohol intake is another matter. It can cause dangerous symptoms, many of which can lead to death:

Alcoholism or alcohol dependence happens when your body can no longer function without the use of alcohol. When it begins to impact your life and cause harm it is called alcohol use disorder (AUD). While there's no cut-and-dried test to determine whether you or a loved one has an alcohol problem there are specific signs to look for that may indicate a problem exists. Here are the most common symptoms:

One of the most common tools used by doctors trying to determine a diagnosis of alcoholism is called the CAGE test. The CAGE is a questionnaire that may help you decide whether your drinking is out of control. There are four questions to the CAGE screening test:

As a rule of thumb if you answered "yes" to two of the four CAGE questions you should consider seeking professional help.

Time to Recover from Effects

Alcohol abuse damages the neurons in all areas of the brain, inhibiting the functioning of the mechanisms and altering the activity of the neural pathways. That being said, the NIH states that after abstaining for several months or a year there may be partial correction of some of these deviances. Although the majority of healing usually occurs during the first year the brain may continue to improve for five to seven years after initial abstinence.

The permanent extent of the functional and physiological damage may depend on a wide range of factors such as length of time alcohol was abused, amount usually consumed, whether alcohol was used with tobacco or other drugs, dietary and exercise habits, family history, and genetics.

Wernicke-Korsakoff syndrome is a condition associated with excessive alcoholism and shows as severe confusion, amnesia, other cognitive problems, and issues with walking properly. This syndrome has been found to be cause by chronic poor nutrition and is often successfully treated with thiamine.

Cardiovascular problems associated with alcoholism may be reversed if the damage isn't too great; any healing usually occurs within the first few months of abstinence. Other changes in lifestyle such as diet and exercise may aid in recovery from cardiovascular problems.

Cirrhosis of the liver means there is so much scar tissue on the liver it can no longer function properly. While mild liver damage may not cause problems cirrhosis may be so advanced the only recourse is a liver transplant.

AUD often causes social problems as well as issues with education and employment. If the person stops drinking soon enough these problems may be resolved but in many cases the damage is permanent.

Alcohol addiction is a physical disorder that requires medical treatment. Trying to quit drinking alone may cause excessive withdrawal symptoms that can be dangerous. A long-term chronic drinker will probably need detoxification under medical supervision followed by treatment in an outpatient or inpatient program to prevent relapse.

Alcohol dependence means the body can no longer function without alcohol. Because the brain has been accustomed to functioning with the addition of alcohol chemicals it can no longer properly send signals to the rest of the nervous system once alcohol is removed. That's why detoxification should take place under medical supervision.

A residential rehabilitation program will include therapy and intensive counseling once the detoxification process is under control. This type of program usually lasts from 30 to 90 days depending on individual needs and situations.

Besides conquering the physical addiction, to successfully abstain from alcohol use the patient needs to acquire new skills to cope with their everyday pressures and stress. A residential program allows the patient to focus on recovery in a comfortable stress-free environment.

After the initial inpatient treatment, the newly recovering alcoholic is encouraged to continue counseling and therapy on an outpatient basis as well as joining self-help groups geared to their recovery.

One of the biggest hurdles to AUD recovery is returning to the company of your family and friends who may still be drinking alcohol. Because of this the recovering alcoholic is encouraged to foster new friendships where alcohol use is not an issue. The family unit can be strengthened through counseling as well as support groups such as Al Anon, which is designed specifically for family members of recovering alcoholics.

Recovering from alcohol addiction is more than "just quitting" alcohol consumption. It will also involve delving into the root of the problem, learning new coping mechanisms, and finding new social skills and perhaps new social groups that don't revolve around the use of alcohol.

Additional Related Articles on How Alcohol Effects You