For better or worse, alcohol has been an enduring and complex aspect of the human condition for centuries. Cultures and societies have been heavily shaped and often characterized to one degree or another by alcoholic beverages of all sorts (beer, wine, spirits, et cetera). Alcohol can provide comfort to the aggrieved, it can relieve tension in those overcome by stress, it can place socially nervous people more at ease, and it can contribute to feelings of great joy. In the United States, alcohol is available at an overwhelming majority of celebrations, parties, and gatherings.

For many people, the prevalence and accessibility of alcohol is more a liability than anything else. This is specifically the case for high-functioning alcoholics, or individuals capable of maintaining a balanced, competent outward appearance while routinely succumbing to psychological dependence upon alcohol. The “sloppy drunk” stereotype has become so pervasive in American culture that it effectively provides cover for high-functioning alcoholics whose image sits at odds with such a caricature.

There is generally a dual-deception at work here. The high-functioning alcoholic deceives (often inadvertently) friends, family, and co-workers by keeping their dependency thoroughly concealed. They might do well professionally, adhere to some degree of physical discipline, and cultivate a polished or at least respectable image.

The second act of deception is housed within the lies they tell themselves. Denial is a powerful force, able to separate a person from objective reality. A high-functioning alcoholic may recognize their dependency subconsciously, all while suppressing that recognition via an ongoing campaign of self-deception.

Denial aside, there are several reliable indicators of high-functioning alcoholism. If you or someone close to you are uncertain as to whether your alcohol dependency has reached that point, review the signs listed below…and be honest with yourself. 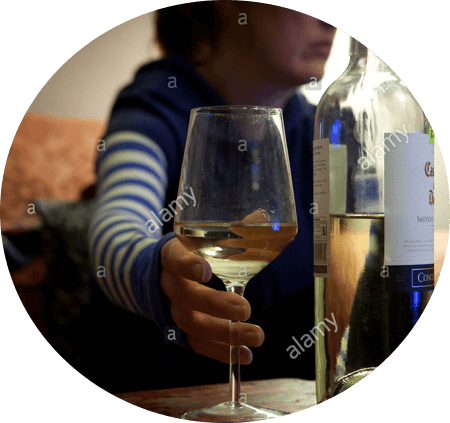 There is having a drink in the privacy of your home and there is drinking alone. This might seem like a distinction without a difference, but the distinction is very real. If you have a glass of wine with dinner or sip a beer while watching television, relax—this does not necessarily qualify as drinking alone in any troubling sense. Quantity is a consideration, and an important one. If that glass of wine turns to, say, one bottle of wine, you or your loved one might be flirting with alcoholism. Likewise, with the beer; one can is not a problem, but when that case begins to feel a bit light as your stomach starts to feel full…well, it’s time to take inventory of your situation.

Ideally, most of your drinking will take place in the company of others, but that will not always be the case. But if, when having a beer on your own, you feel a powerful urge to drink as though celebrating something (anything), stop and for a moment and reflect on how frequently that feeling has materialized. The answer may reveal something of crucial importance. 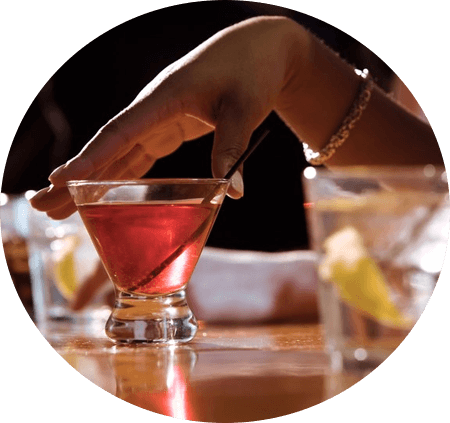 Stress, grief, and anxiety will inevitably manifest even for those living the most charmed lives. The various ways people go about dealing with these emotional burdens differ greatly, but for many it involves the help of alcohol. You may have experienced this firsthand. Perhaps you lost a parent or a lifelong friend. Perhaps you missed out on a promotion or a well-deserved raise. Perhaps you are feeling incessant financial or professional stress.

If, when confronted by any of these challenges, your first instinct was to seek sustained comfort in a shot glass or in a box of wine, this might be a sign of alcoholism. You needn’t be falling over yourself in outright drunkenness for that to be true. In fact, high-functioning alcoholism generally precludes as much. It could be that you wear a brave face while in meetings or with your family, then retreat into a bottle once the façade is no longer necessary. If that sounds at all like you or a loved one, it may be time to seek help.

3. A drink at every opportunity 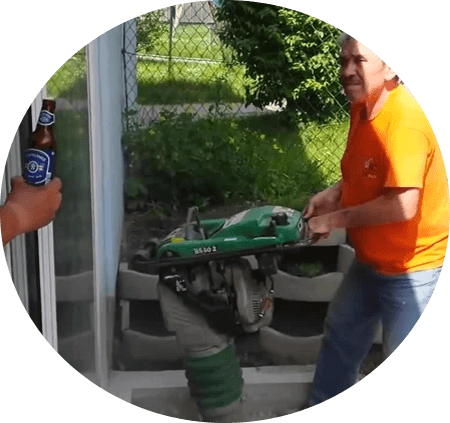 This ranks as perhaps the most outward and clear indicator of high-functioning alcoholism. There is an old joke about “…drinking only on days that end in ‘Y’…” For many high-functioning alcoholics, the problem is one of drinking both during and in-between meals. It extends to drinking whenever the situation permits. Breakfast with a friend on Tuesday morning – How about a mimosa? Stopping by to pick up some tools from your brother-in-law – Why not also stay for a beer or two? Brief midday layover in Chicago – The bar will probably welcome my business at 11:38 on a weekday.

Eventually, the reasoning becomes a necessary step toward rationalizing your alcohol consumption. You rationalize internally or, if in the company of others, voice a weak explanation of some sort. “This business deal is kicking my butt,” or “I can’t believe it’s raining in June. I need a drink.” The reasons don’t matter, not really. They exist only to thinly rationalize drinking to the point of excess. When it reaches a certain point, such as outright fabrication of excuses to drink, the alarm bells should be detectable to all. But there are significant obstacles to addressing this problem.

For whatever reason, the tendency to drink at every turn is sometime regarded as a quirk, a charming characteristic. It is certainly nothing worth treating as a real threat to a person’s wellbeing. Furthermore, the social qualities necessary to gloss over the dependency tend to be effective rationalizing agents. Both the drinker and those privy to the drinking may find their concerns muted by the former’s ability to explain every afternoon gin-and-tonic or lunchtime shot.

As noted earlier, many high-functioning alcoholics are able to move through their daily lives while exhibiting minimal indications of their underlying problems. This may be true of you or your loved one. But many others find the balancing act tricky or even impossible to manage for very long. Cracks eventually appear, and performances begin to suffer where they matter most. No matter your profession, some degree of accountability and competence is necessary to see you through the daily workload. It can be “phoned in” for a time in some trades, but not forever. And those who are charged with gauging your competency and reliability will soon be wise to the problem at hand.

Whether it is immediately identifiable as an alcohol-related problem or not is beside the point. When your ability to complete the tasks you were hired to complete is compromised, the results are self-evident. Likewise, punctuality. Arriving to work on time (or at all) is generally smiled upon by employers. If that aspect of your performance begins to suffer, the consequences will soon follow.

Reflect on your own professional performance, or that of a loved one you fear may be suffering from high-functioning alcoholism. Deficiencies tend to be obvious, even if we are reluctant to acknowledge them. Read the warning signs clearly and act accordingly. Delays on that front could result in avoidable career peril. 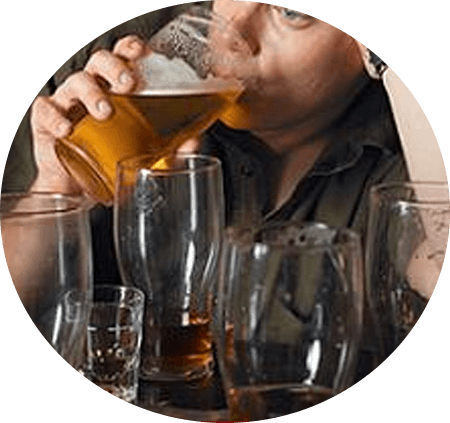 Alcohol can only be processed by the human body in limited quantities, but the body’s biochemistry is rather adaptable. People with a history of sustained alcohol intake are notably more resistant to drunkenness than are those who drink infrequently or in moderation. Composure can also be practiced to an extent. High-functioning alcoholics will almost always exhibit high levels of alcohol tolerance and can avoid appearing overtly drunk once the alcohol sets in. This is not a superhuman quality by any measure. It is a natural biological response to high-volume alcohol intake.

If you have noticed you never seem to “get drunk” and you remain seemingly unimpaired following two or three drinks, it’s possible your tolerance has been strengthening as your will to abstain from alcohol has been weakening. Recognizing as much is crucial where seeking treatment is concerned. None of this is to say that resistance to drunkenness is a definitive sign of alcoholism (high-functioning or otherwise). A healthy, athletic body might also be less prone to inebriation than an unhealthy counterpart, as metabolism and muscle mass contribute greatly to human biochemistry. Even so, a high-functioning alcoholic will generally have some awareness of their higher-than-average tolerance. Register that awareness responsibly, if it does apply to you.

The clearest problem indicator a high-functioning alcoholic is likely to privately experience is that of alcohol withdrawals. These are the body’s involuntary responses to an absence of alcohol which can manifest both psychologically and physiologically. Feelings of anxiety are common for those suffering from alcohol withdrawals, as are feelings of depression. Severe withdrawal will see a person plagued by nausea, disorientation, and fatigue.

When these sensations follow even a brief period of alcohol abstinence, the signs of alcoholism are very much in evidence. Persistent withdrawal symptoms can result in poor overall health and an inability to maintain mental focus. They also lead to more drinking, as the temporary relief it brings can prove difficult to resist for many high-functioning alcoholics. You should not dismiss or outright ignore this most serious sign of high-functioning alcoholism. At the first sign of alcohol withdrawal symptoms, seek out qualified help.

If you are at all uncertain as to where you fall on the alcohol intake spectrum, measure your drinking volume against an established guideline. Doing so will provide you with a baseline understanding of your dependency level. From there you can, if necessary, look into treatment options designed to help high-functioning alcoholics reclaim control of their lives.